The History Of Cleaning

The techniques, roles and methods involved in general and household cleaning have evolved dramatically since history began. This article is going to cover the comprehensive timeline of how cleaning has changed throughout history. So get your feather dusters at the ready, as we take a look at everything from Ancient Egyptians to Henry Hoovers.

It is a common theme throughout history that the wealthy would exploit the poor by commanding them to do their cleaning for very little — if any — pay. This was first observed way back in the Ancient Egyptian times, in which the powerful would command the slaves to perform cleaning and primping tasks on the Egyptian rulers. This was no easy feat either, as cleanliness, aesthetics and image were all a big part of Ancient Egyptian culture. This can be observed through the copious amounts of makeup they wore, as well as the pristine sarcophagus’ and grand burials that have become synonymous with Ancient Egyptian life. 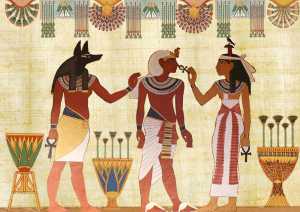 The Egyptians used vegetable oil and alkaline salts to make soap that they used to wash themselves and their clothes. The Greeks moved away from this practice and chose to wash themselves using sand, clay or ashes. This would be followed by a thin layer of oil that would be scraped off their bodies with a metal blade. Following them, the Romans greatly promoted cleanliness by building public baths and making soap out of animal fat, ash and water. Cleanliness appeared to be on a constant rise, with each major ancient civilisation promoting cleanliness as a focal part of society.

And then came the dark ages.

This period between about 500 and 1000 AD saw a dramatic decline in hygiene standards. Sewage systems were non-existent and streets were commonly strewn with all sorts of household and bodily waste. This attitude was driven largely by the sheer lack of knowledge connecting hygiene with disease. As a result, many, many diseases, would spread throughout society, and this trend would continue until greater scientific knowledge was realised.

Once the connection between hygiene and disease was discovered, attitudes towards hygiene began to change. By the 17th Century, cleanliness became not only customary but fashionable. Manufacturers started developing soaps that became widely popular and this paved the way for regular household cleaning routines.

The hierarchical relations that dictated household cleaning customs greatly mirrored that of Ancient Egypt times around four millennia prior. The rich would not spend their time on petty cleaning jobs, as they had far more important things to attend to. As was customary, they hired poorer, lower class women to manage these jobs for them instead. Many of these poorer women had very little employment options and were often exploited by receiving very little in exchange for their laborious efforts.

Little evolved for the next few centuries, with women — now firmly cemented in their roles as maids — continuing to offer cleaning services to the rich. This would continue up until WWI, at which point countries across the globe demanded a shift in labour roles. As millions of men went off to war, women were needed to fill other jobs and soon discovered they had capabilities beyond those of maids. Armed with their new set of skills along with their fiery desire to make more of themselves, many women refused to go back to cleaning after the war and instead sought other jobs. This led to a significant decline in maids — a decline which shrunk even more so after WWII came around and the same process occurred. Soon, the availability of maids dropped so low that wealthy women were forced to look after the house on their own, ushering in an era of ‘the housewife’.

As maids were in short supply, someone in the household — even in many wealthy ones — would be responsible for the upkeep of the house. This was of course not going to be done by the men, so gender roles became even more ingrained in society as women across the country took to housekeeping, cleaning and cooking. It was common to find women attending classes and reading books to improve their skills in these areas. Many would invest in electric cleaning appliances, such as vacuum cleaners, as new technologies became available.

As the decades have progressed, gender stereotypes have become less and less prevalent. Many men take part in the cleaning just as much as women, and professional male cleaners are much more common than they once were. ‘Maid services’ have evolved to become respected professional cleaning companies, which incorporate extensive cleaning services throughout the home for a fair (albeit competitive!) price.

Here at Direct Cleaning Services, we offer a wide range of services to ensure your property is sparkling clean. To enquire further, give our friendly team a call today and we’ll be happy to help.

Any cookies that may not be particularly necessary for the website to function and is used specifically to collect user personal data via analytics, ads, other embedded contents are termed as non-necessary cookies. It is mandatory to procure user consent prior to running these cookies on your website.